We want to be well-liked, but in trying to please everyone and prevent hurt feelings, we often end up creating the very drama we sought to avoid.

In this article, I’m sharing the six ways we tend to avoid conflict with a coping behavior. What I discovered when researching these behaviors is all of them are founding on an essential LIE we are telling ourselves.

When you avoid conflict by shutting down, you’re completely disconnecting from the other person, the issue, and even yourself. 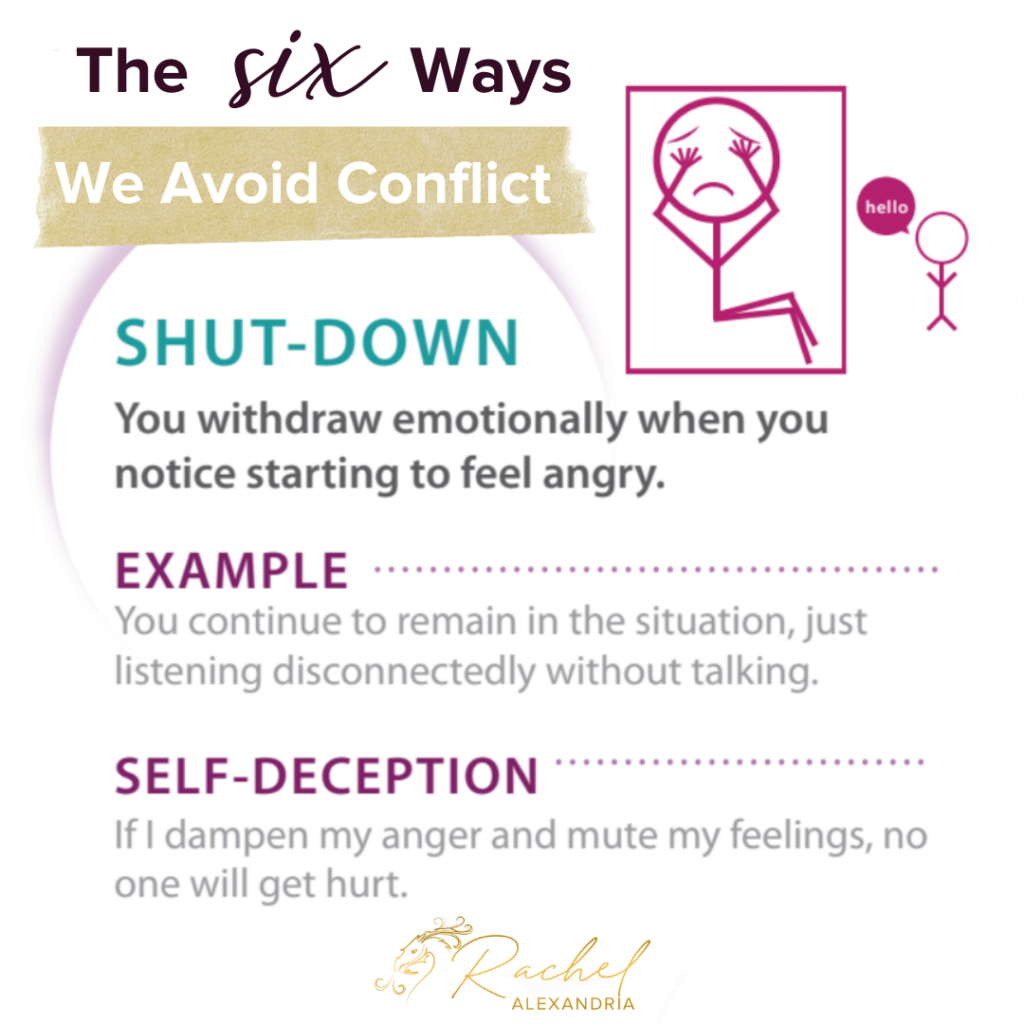 Running away, essentially, from the issue without speaking to your needs or being present for the other person is hurtful to both parties and creates more drama.

For example, when you stop talking and stop feeling or connecting with anyone.

In essence, you’re deceiving yourself by thinking that if you turn off your feelings and connection, you’ll stay safe from hurt and protect others from hurt.

With SHUT DOWN, the essential LIE is that completely shutting down connection will keep everyone safe. It doesn’t. People feel hurt when you disappear, and your feelings need to be listened to by you as well.

While it’s fine to take a break from intensity to calm down and hear yourself, Shutting Down completely without communicating to anyone causes more harm, not less. 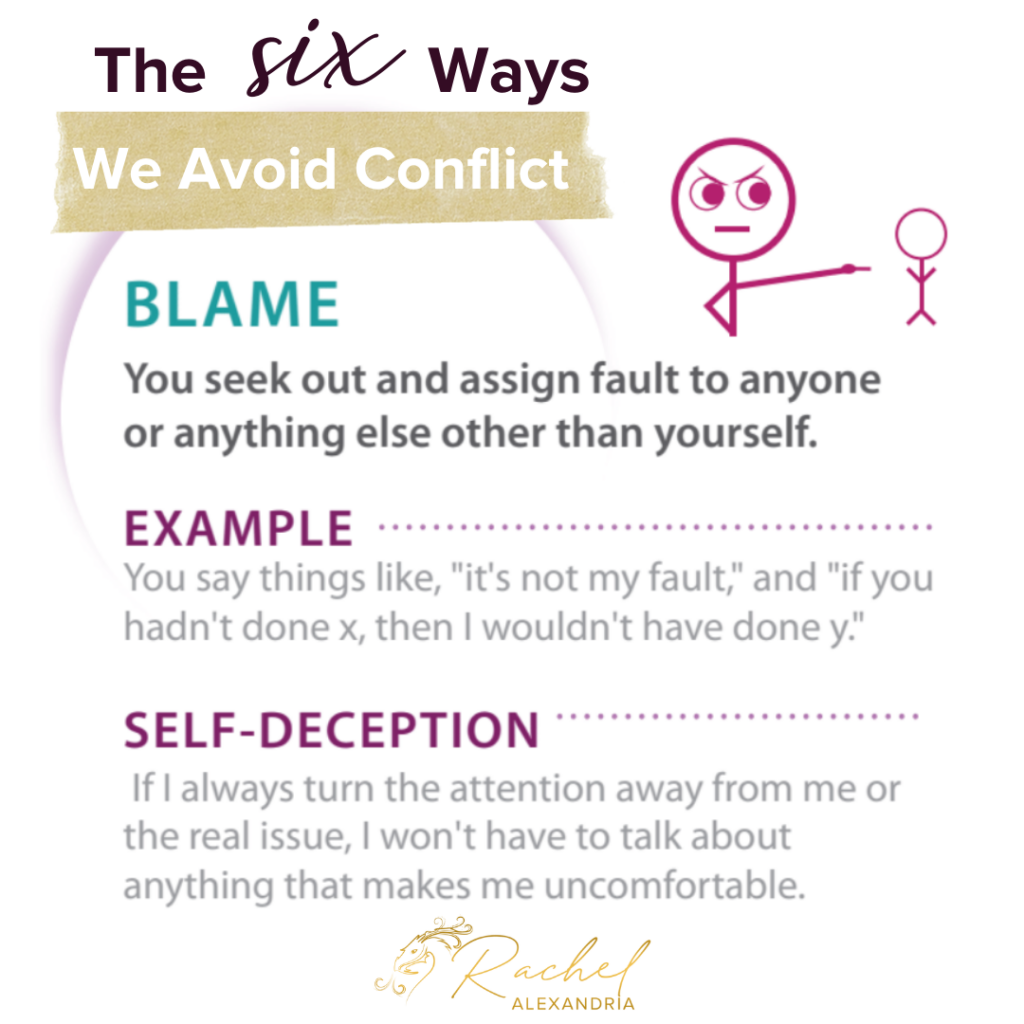 When you avoid conflict by blaming others, you’re assigning fault to anyone other than yourself and not taking responsibility for your part of the issue.

Not taking accountability for getting your needs met leads you to blaming others and perpetuating the drama cycle.

For example, when you say, “if you hadn’t done x, I wouldn’t have done y.”

In essence, you’re deceiving yourself by thinking that if you turn the attention away from your responsibility, you won’t have to deal with feeling any discomfort.

With BLAME, the essential LIE is that difficult situations happen without your input or participation. We all have responsibility for how we contribute to conflict, either through action or inaction.

When you avoid conflict by distracting yourself, you’re focusing on busy work rather than clearing up something difficult between you and others. 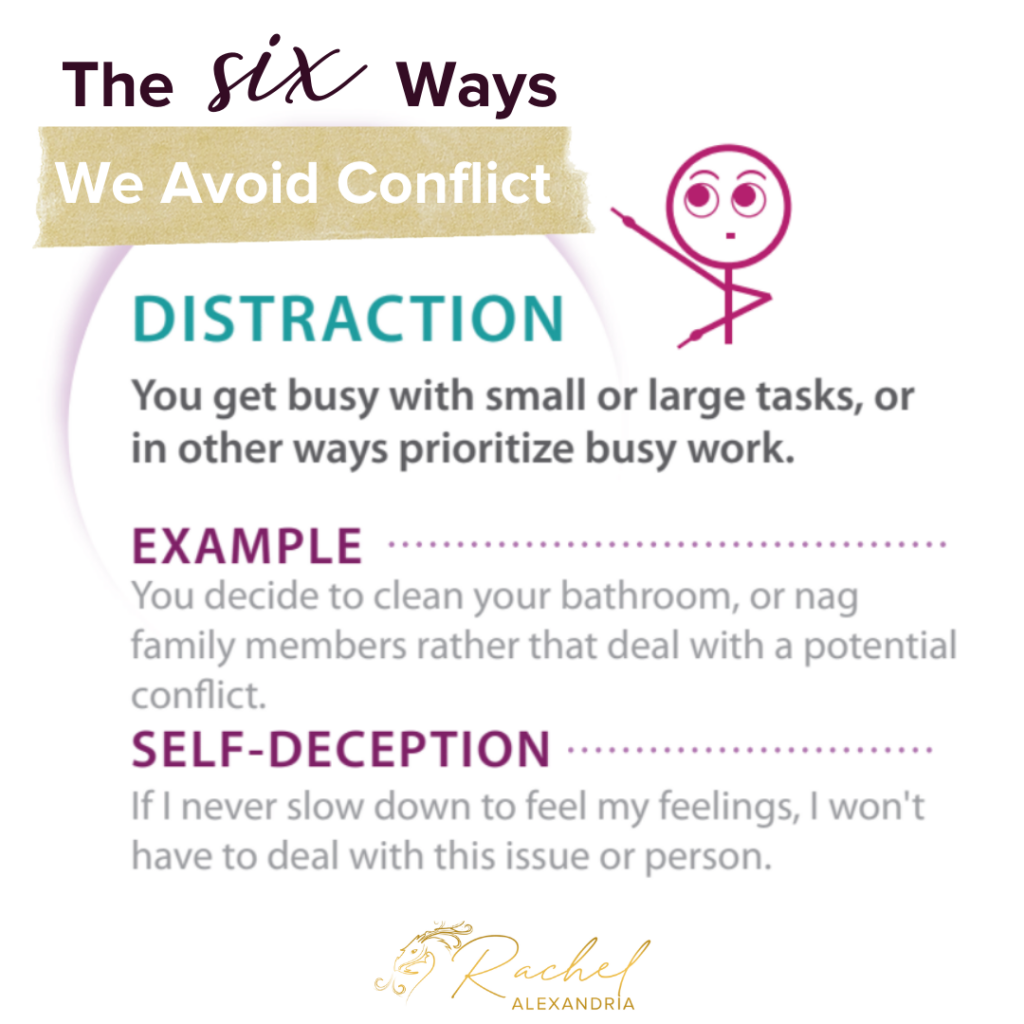 Not taking responsibility for speaking up for your needs met leads you to building resentment and perpetuating the drama cycle.

For example, when you get mad but decide to clean the whole house out of frustration rather than talk about what’s wrong.

In essence, you’re deceiving yourself by thinking that if you keep busy you won’t have to deal with feeling any discomfort or talking about hard things.

With DISTRACTION, the essential LIE is that difficult situations will go away if you ignore them long enough. They don’t. And in fact, not addressing your feelings and needs and those of others just creates more hurt feelings and disconnection.

When you avoid conflict by self-flagellating (beating yourself up), you’re taking on all the blame and criticizing yourself for what happened. 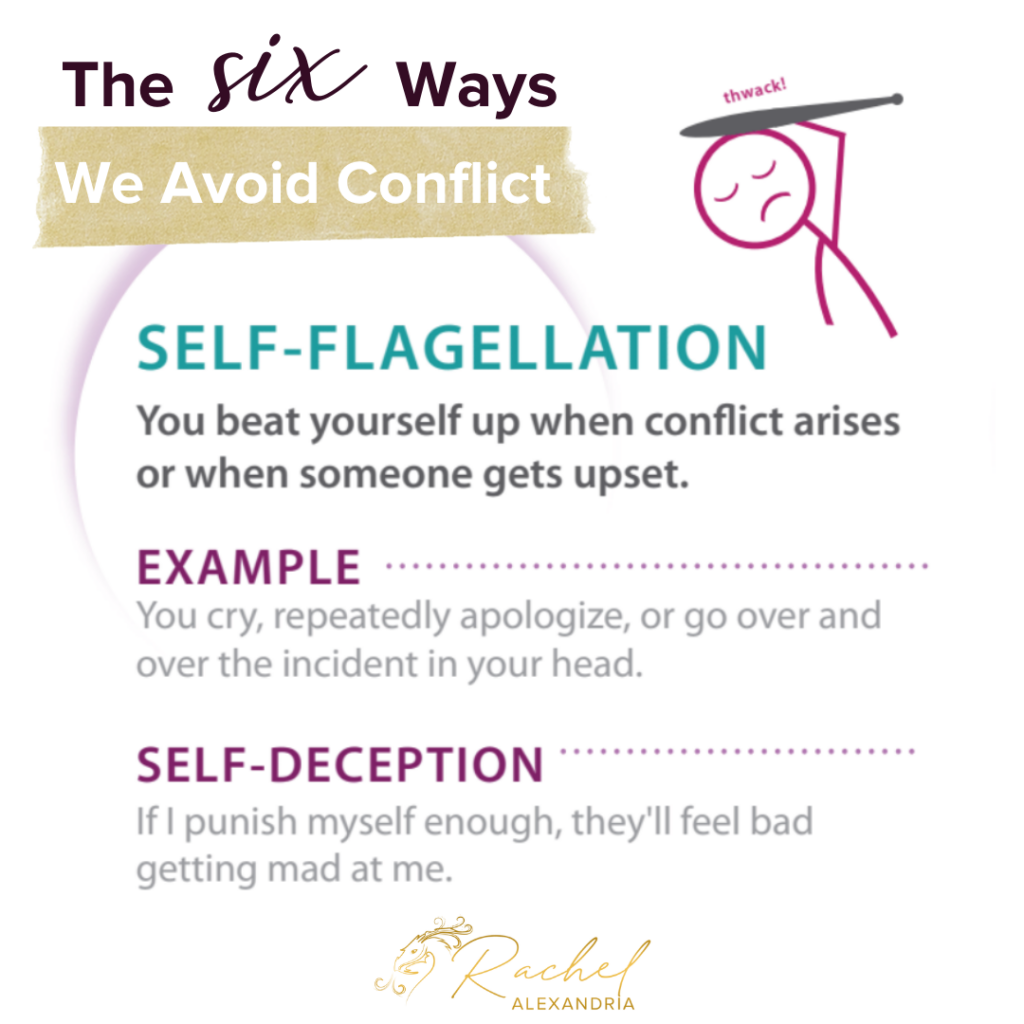 Actually, taking all the blame for yourself and focusing on your own self-criticism is another way of avoiding conflict and not being present for the difficult conversation with another.

For example, when you repeatedly apologize and focus on feeling terrible for your actions.

In essence, you’re deceiving yourself by thinking that if you focus on beating yourself up, that self-punishment should be sufficient and there will be no need to talk things out. And further, maybe they will feel so bad watching you hurt yourself that they’ll stop being mad.

With SELF-FLAGELLATION, the essential LIE is that you punishing yourself will somehow make the other person feel better and forgive you. It doesn’t. When you focus on self-flagellation, you’re not actually being present to the other person and their feelings and needs.

When you avoid conflict by being passive-aggressive, you’re pretending things are fine while sending nonverbal signals that things are quite the opposite. 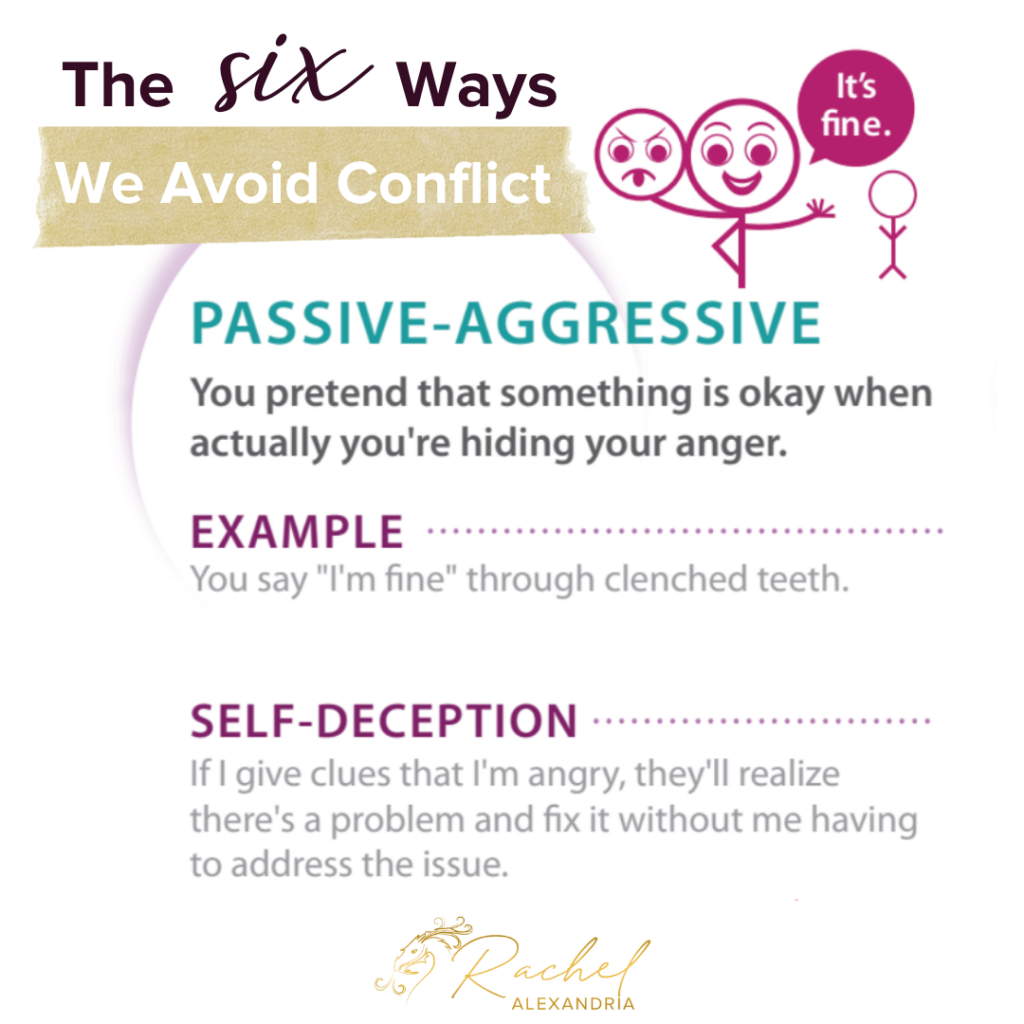 Not being honest with others about how you’re feeling doesn’t allow them to have a straightforward discussion with you and makes them guess what’s wrong…and how to try to fix it. It foists all the responsibility on the other person to sort out the issue.

For example, when you say, “everything is just GREAT” in a sarcastic voice while walking away.

In essence, you’re deceiving yourself by thinking that if you give clues about your anger, the other person will know something is wrong and work to fix it without either of you having to actually talk about it.

With PASSIVE-AGGRESSION, the essential LIE is that people are going to be able to read your mind…and additionally, that it’s 100% their job to fix things. Difficult issues arise when our feelings and needs aren’t met, but it’s OUR job to express our needs and make requests for them to be met.

When you avoid conflict by being overwhelmed, you’re trying to sort everything out in your head and playing out a million possibilities rathe than having a direct conversation.

Not bringing the other person into the conversation about feelings and needs leads you to feeling isolated and overwhelmed.

For example, when your thoughts are spinning super fast and you’re full of “maybe”s and not in touch with your feelings.

In essence, you’re deceiving yourself by thinking that you can THINK the situation into a peaceful solution rather than taking action to talk with the other person.

With OVERWHELM, the essential LIE is that you can resolve the entire problem in the container of your own mind. You can’t. Conflict needs to be handled through a two-way conversation with the other person.

What can you do instead of these 6 ways of avoiding conflict?

Learn how to have hard talks with clarity, courage, and healthy boundaries.
This will take work, but is 100% a learnable skill set. I’ve walked through it myself, from fearing conflict and avoiding it like the plague to stepping confidently in, knowing I can handle whatever comes up in the conversation.

Tools like Nonviolent Communication or my own book “Woman Overboard!” can help, as can working with a coach or guide.

My clients often start out pretty apprehensive, but they find when we prepare ahead of time for difficult conversations, they end up sailing through them way more smoothly than they had believed possible.

This isn’t something that is easy to figure out on your own. People who get good at conflict conversations have usually done so through group trainings or focused coaching. It’s reasonable and normal to need help with this.

If you’d like my help getting better at dealing with conflict and speaking up for your needs without being a jerk, reach out to me for a free consultation.

No products in the cart.